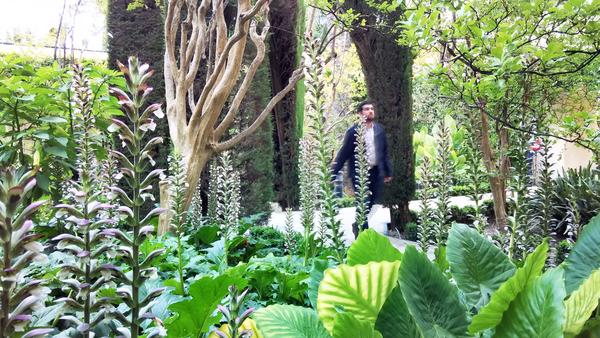 Of all the Renaissance gardens, perhaps this one was the one that could better verify the revival that was done during the Renaissance of the Greek and Latin mythology. Thus in the “Dance Garden” there was a circle of vegetable figures worked in myrtle, the dancers, who, together with the lead figures of a satyr and a maenad who were on the stone columns that still remain today, alluded to the unbridled courtship of the god Dionysus-Bacchus. The effect of mystery and surprise, as well as the festive character of this garden, was completed by the hidden fountains, small holes in the ground called mockeries, which caught an unprepared visitor in an unexpected cloud of water. The garden is in itself a powerful place of connection of different spaces. Longitudinally, here the gardens of the low pond are linked with the “Pond of Mercury” located to a higher level. On the other hand, it transversally communicates the lower part of the old cruise garden of the Gothic Palace of Alfonso X, now covered and known as the Baños de María de Padilla, with the Renaissance Garden of the Ladies. Meeting point where the water and the underground are allied, hosting the closest and esoteric of the garden. Not by chance the fountain located in its centre is denominated “Fountain of the sign”. Palms, datura, Jupiter trees, myrtles, acanthus and cypresses, among others, form the voluptuous and exotic gardening of this space, led together with the columns by two huge magnolias planted in the mid-nineteenth century.