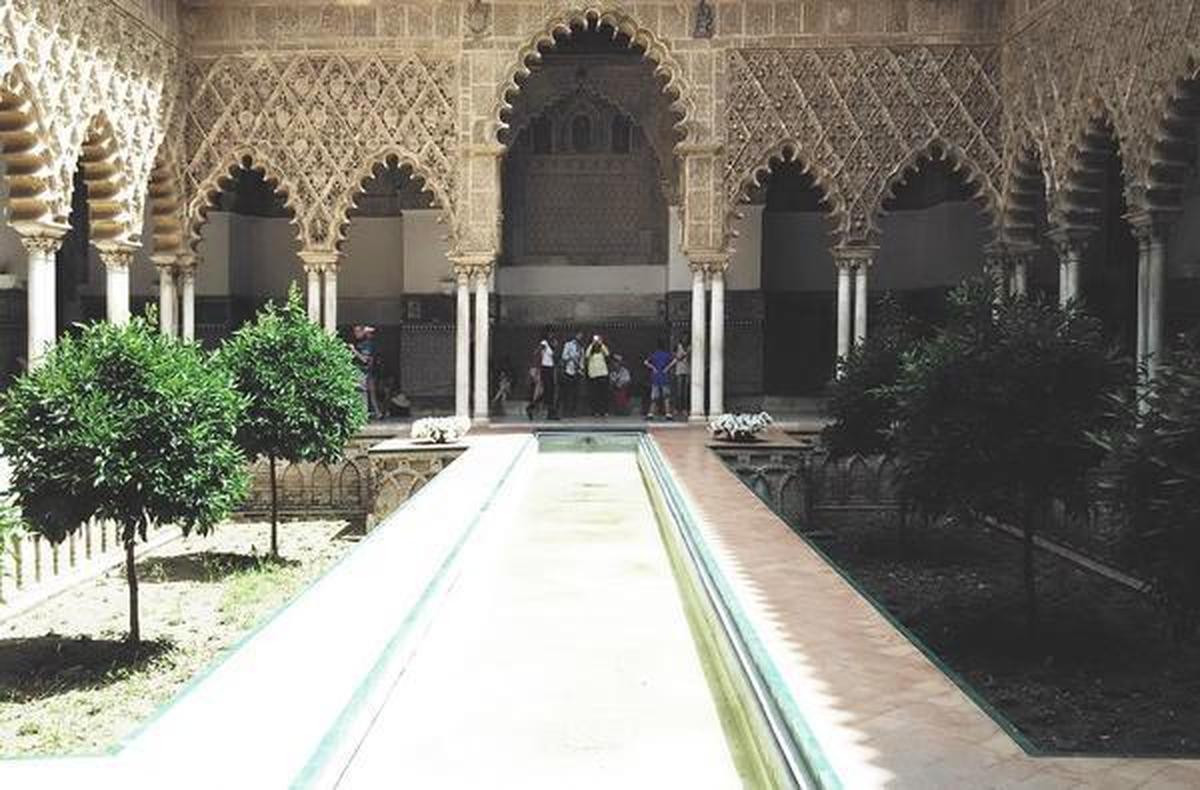 In this space we can observe elements of the two main reforms of the Alcázar, the Mudejar of Pedro I on the ground floor and the Renaissance of the first monarchs of the House of Austria in the upper gallery. Originally known as the Courtyard of the King, the one of the Doncellas (Maidens) is the central courtyard and heart of the palace of Pedro I. Following a trend of Muslim civil architecture, inherited from the ancient Mediterranean tradition, the centre of the house is occupied by a courtyard, around which the main rooms of the house are distributed. The water and vegetation make up a closed and intimate garden, within reach of the senses, that evokes the oasis, the paradise for Islamic culture. The joyful nature of the garden finds its continuation in the architecture itself: in the beginning of the arches there is the hand of Fatima, a talisman in Islam, from which you can see plants sprout that extend through the arches to form, next to the columns, a simple forest of trees of life that corresponds with the orange trees that surround the central pool. The pool illuminates the walls of the palace, projecting on them the changing visions produced by light on its surface, while allowing the reflection of the architecture to multiply in it in an unrealistic way, like a mirage. Through these games of correspondences and mirrors, architecture and nature remain in this courtyard united forming a whole. The upper gallery is a later enlargement that the Catholic Kings began as a residence for the colder months of winter. The classical architectural aspect that this gallery presents today is due to the Renaissance-style reform that took place in the Alcázar during the 16th century, following the wedding of the Emperor Charles I of Spain, V of Germany, and the princess Isabel of Portugal in 1526. Both are represented in memory of their marriage, framed by a laurel wreath as the ancient Roman emperors, in the reliefs of this Upper Gallery of the Patio of the Maidens. The violets are grown today alongside the bitter orange trees in the middle of the courtyard. The characteristic flower of this plant was characteristic of a very typified space in medieval Christian literature, the ‘locus amoenus’, the pleasant place, normally associated with the cloisters of the convents. Coincidentally, Andalusian literature also includes violet as part of the flora characteristic of "pleasure gardens". The hybridization of Christian and Muslim architecture of this patio is thus a further development in the vegetation of the place.